Greetings people of the internet. I am an unusually tall man, and I would like to give you a glimpse into the lives of weird creepy tall humanoids like myself, and at the end of the tour, hopefully we will both be better off because of it. Change the world, the Universe, the MULTIVERSE! 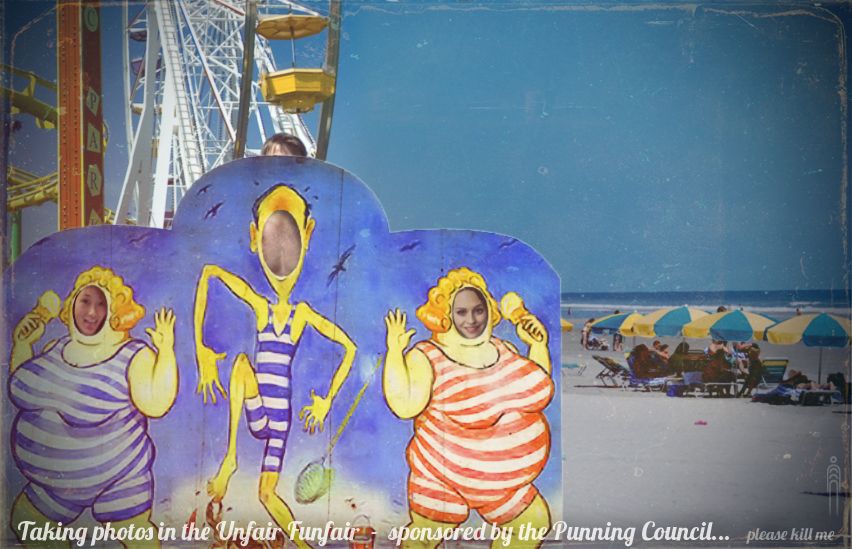 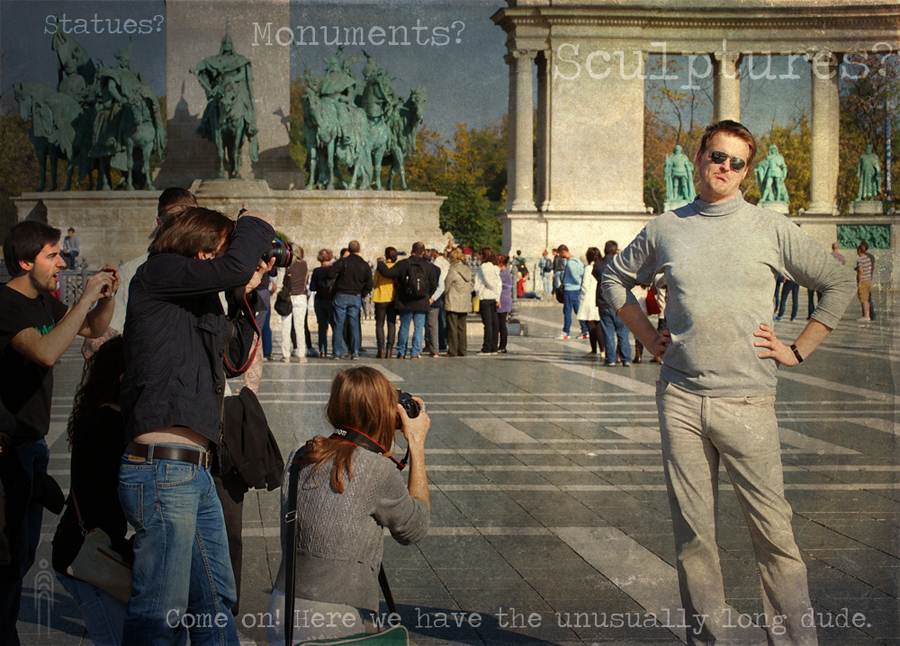 Belive it or not, people often ask to take a picture with me even at locations with much more interesting surroundings. All right, for this picture I asked this nice tourist group to PRETEND to take a picture of me, but then it turned out that they actually did. Such is life. 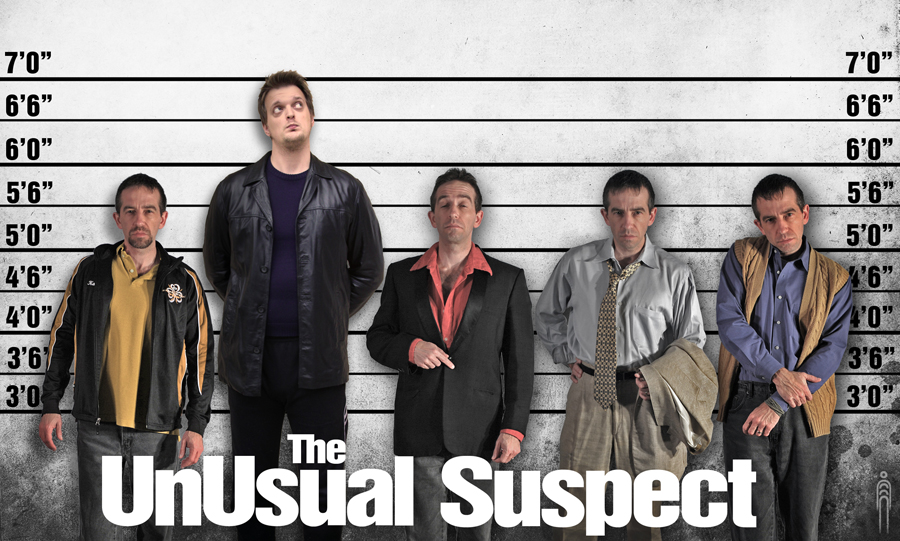 -Ma'am. Can you identify LongMan, the brand new vigilante hero?
-I think he's the second one.
-From the left?

I could never be a superhero (or even a super villain). I am too easy to recognize. Before you know it, I would be caught and sentenced to a maximum security Moon prison for four thousand years. To make matters worse, every time a masked tall fella robs a bank, I'm heading to jail. 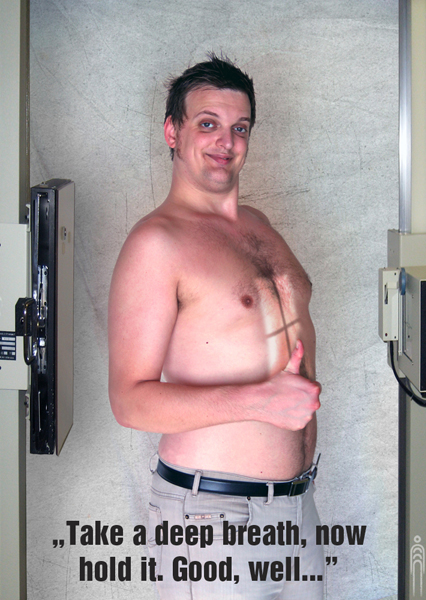 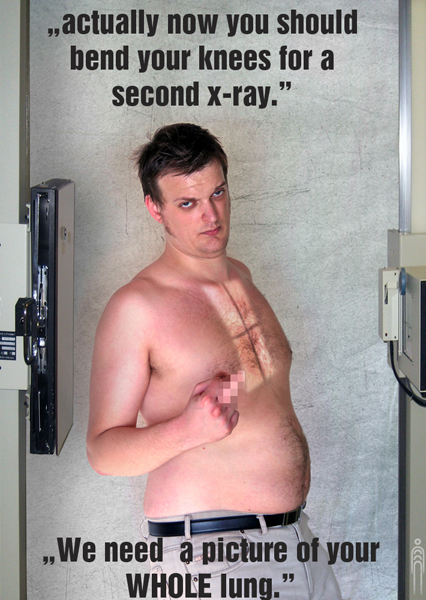 This actually happened to me: a few months ago I had to go to a chest examination, and because of the size of my lung they had to take 2 x-rays. I asked the nurse:
"Isn't it bad to get 2 doses in a row?"
Then she said:
"Oh no, it's like sunbathing for 30 minutes."  Well, if she says so...

Later, as the doctor tried to join the two images into one big picture of my lungs, he asked
"Have you ever taken any medication to manage your size?"
I was speechless. Is being tall an illness? 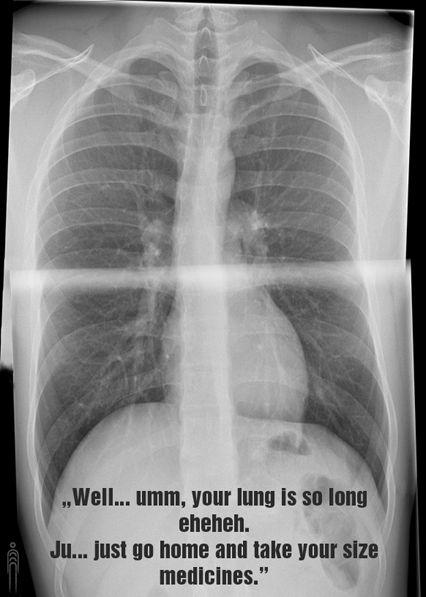 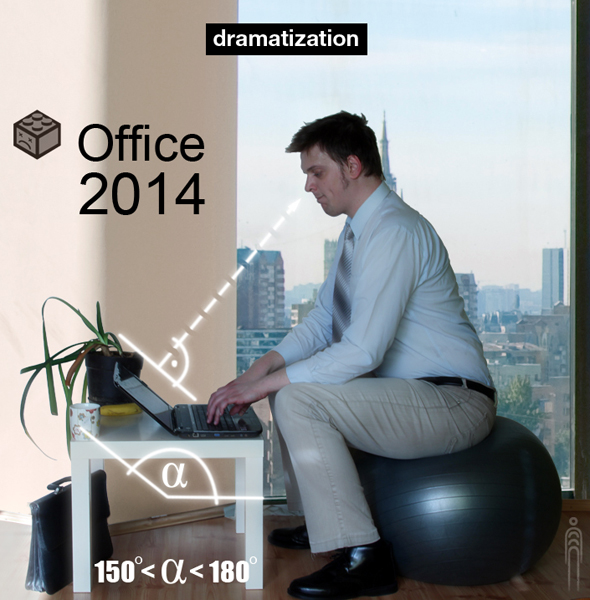 All right, you may say I should know better than to use a laptop on such a low table but in fact I always have to open the screen this wide (unless I want to lie down in my chair). 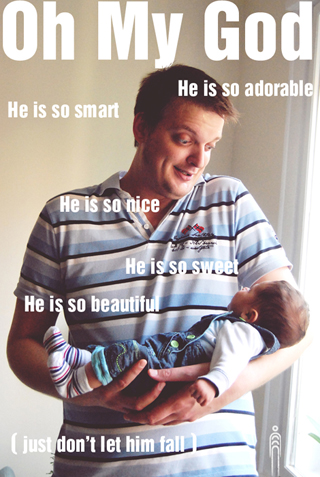 After all I'm not sure if I want a child. Maybe if we lived in the world of Gattaca where every parameter of a newborn child could be specified before insemination I might say yes. But until then, I am not sure I want my offspring to have a life like mine. But I have faith in science, so I won't give up! Oh wait, there's another tiny problem... 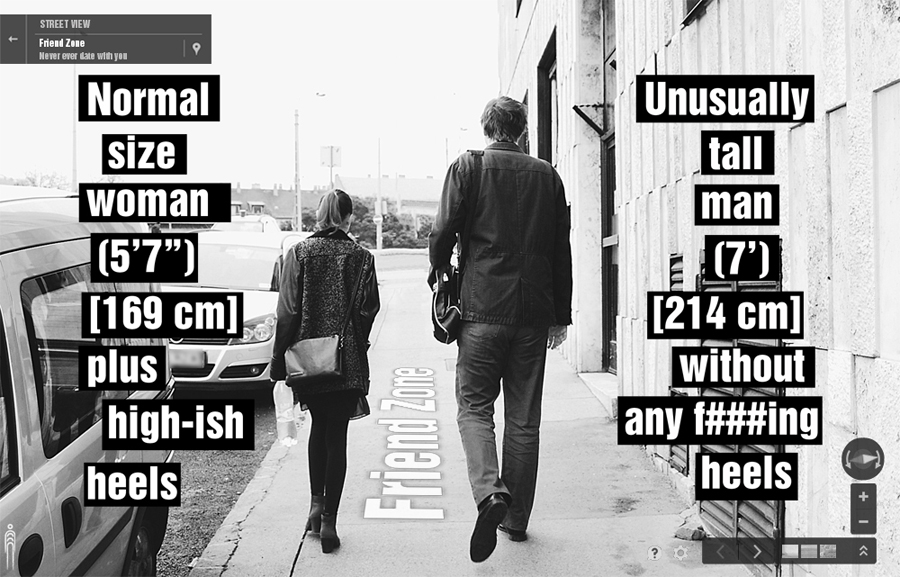 As you might have noticed, I'm not, to put it mildly, a Brad Pitt look-a-like, and on the top of that, I'm super tall. You might say: "But yo, hey, there are many tall girls in the world dude-bro!" but I have to ask: "A Montague must love another Montague? What's about Capulet? What's about genetic diversity, the key to  healthy offspring." Well, male-mates, you have to celebrate: one less opponent in the "find a cute girl" contest. 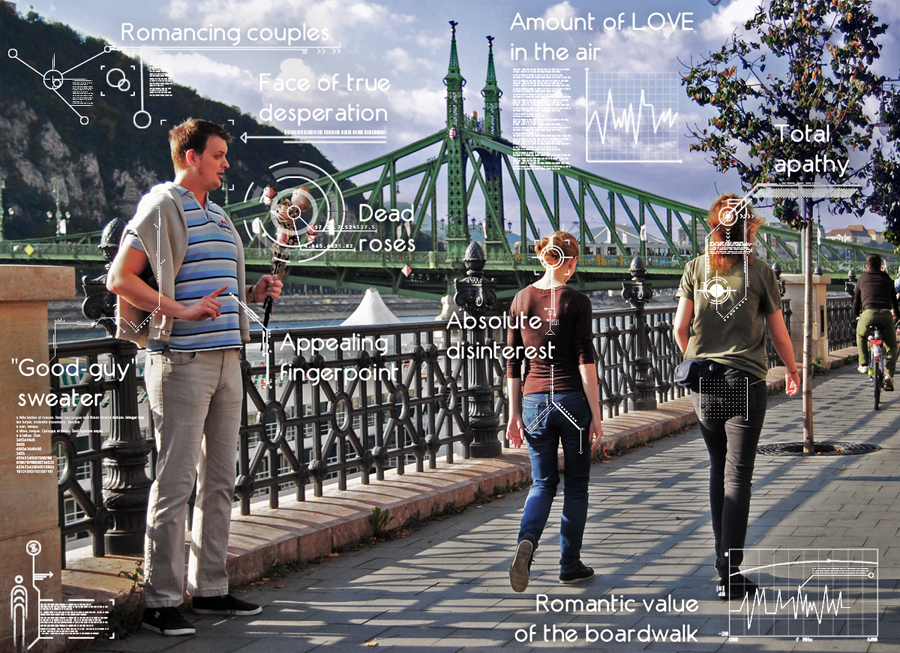 OK, I had several girlfriends, but to finding them was like discovering the Fountain of Youth... it was TOUGH! Finally you can say women love tall men. It's probably true, but let's put it this way: if you are nice tall you can be Darth Vader, but if you're weird tall, then you can only be Chewbacca. Which one would you rather be? 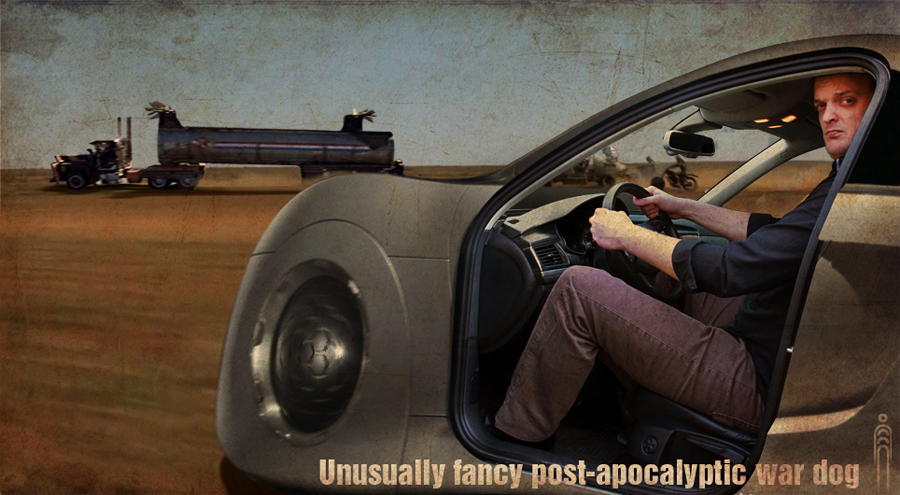 I don't know who was more curious as to whether I would fit in this car, me or the owner. Even though this is a huge  European A class luxury car with one circle less than the olimpics, but as you can see, even in a huge drag, I don't have any chance of driving it normally. 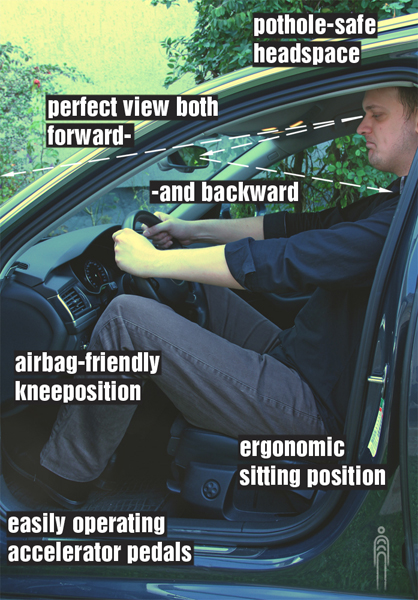 Of course, in a dystopian future on a deserted wasteland, if my life depended on it I could somehow manage to drive it, but untill then I'm riding shotgun or taking public transportation. Oh, by the way... 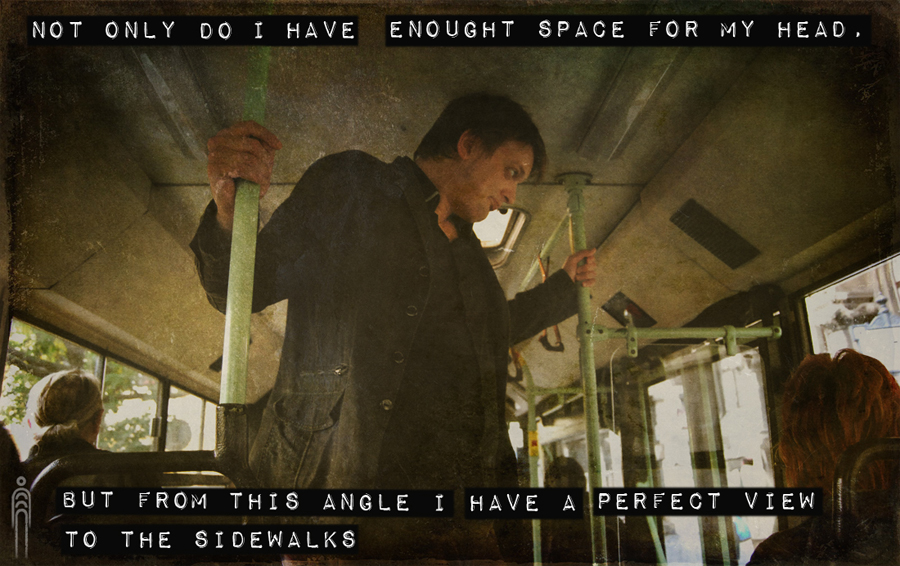 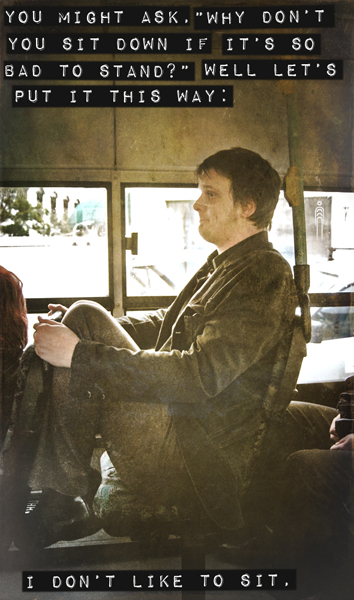 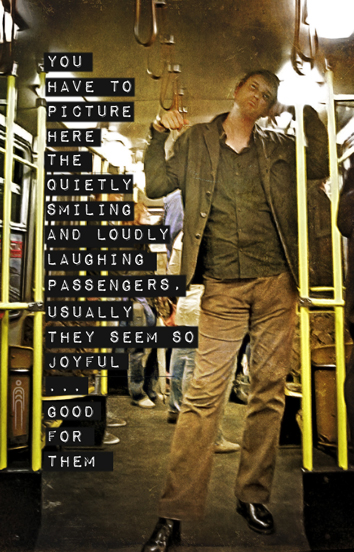 Sure there are bigger public vehicles, but these buses and the subways were not designed for children. These are for normal people, but if I use them my legs form the letter "A" while my  spine forms an "S". 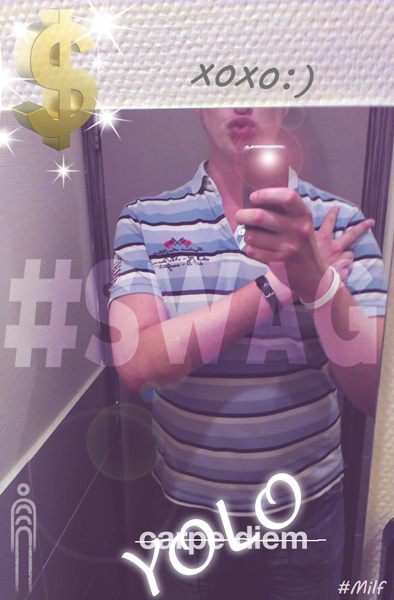 I made this selfie out of desperation fueled by a midlife crisis. I wanted to show what a cool and  youthful guy I am. Too bad the mirror was not big enough. Well whatever, the point is #SWAG #YOLO etc.

Pip-Boy in the bathroom 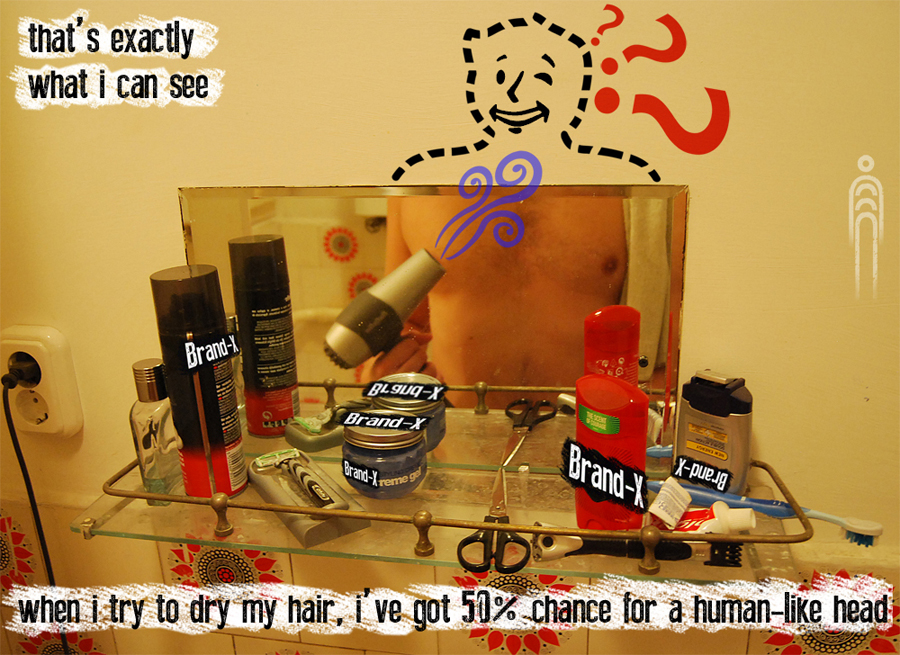 On the topic of bathroom mirrors, when girls tell me that my hair is so "progressive and brave", this is why.

For the love of Gronk 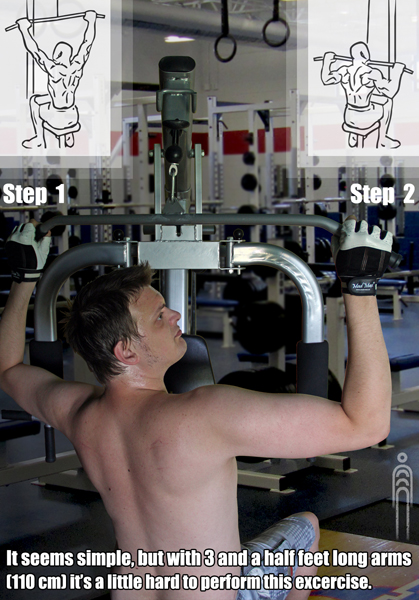 Oh yeah! Sports. Another goldmine... of bullying me. Everyone ask me at least for the third question "Do you play basketball?",When I disappoint them and say "No" they turn around say "You really should play basketball." It is as if I were a super genius that used my super intelligence for playing video games instead of curing cancer or searching ways to interstellar space travel.  Don't blame me because I don't like basketball. I do like working out but as you can see, it's not that easy. 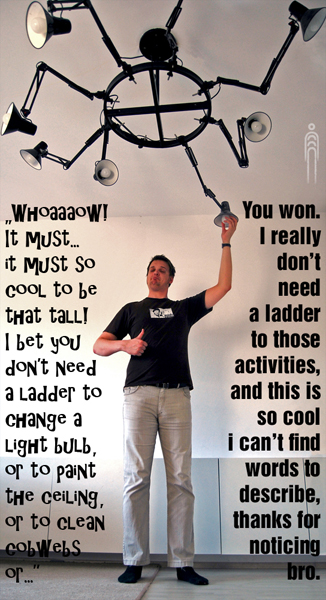 I've heard a xillion times some variation of the sentence: "I bet you don't need a ladder for <Insert some activity where height is an advantage here>, right?" It's true that I can reach almost anything with my unusual height and long tentacle arms but it really doesn't make things much easier in everyday life. In fact, I feel I play the game of life at the hardest setting. Actually, if life truly was a game I'm pretty sure my character card would like this: 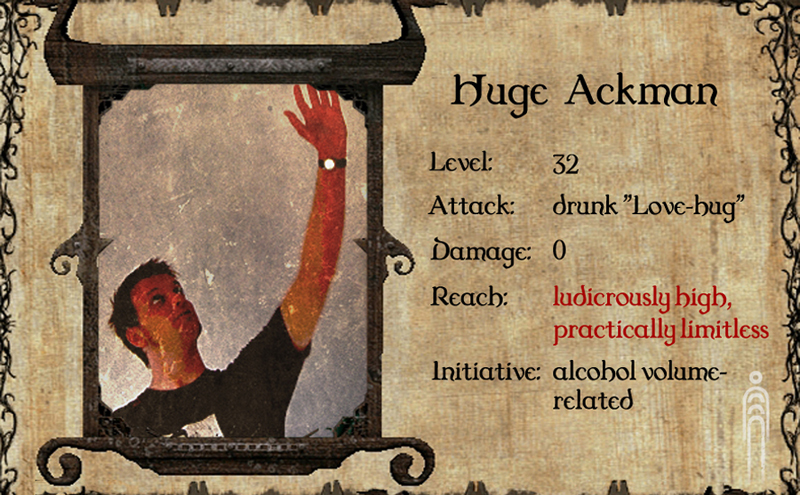 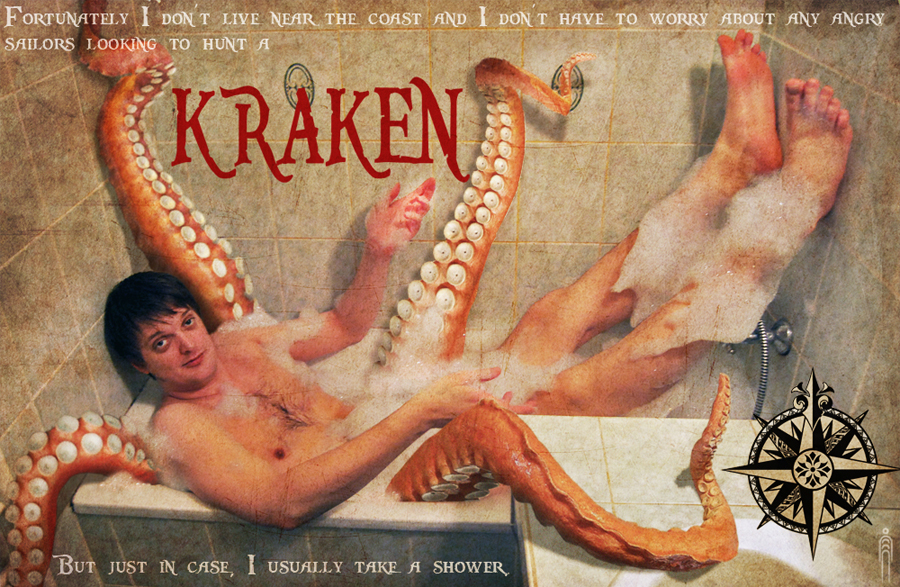 In a parallel universe where we were at war with krakens, I could be the perfect spy. But untill then all my bubble bath seem a Lovecraft horror. 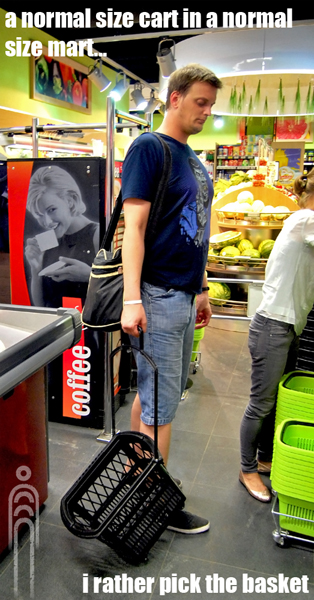 I swear to the Logic of the Vulcans that I am not stretching (though maybe I took a deep "oh sh!t" breath when I saw my friend taking this picture). You know, it is funny watching a tall man survive in the normal world, in this case: grocery shopping.

Thanks for the false hope 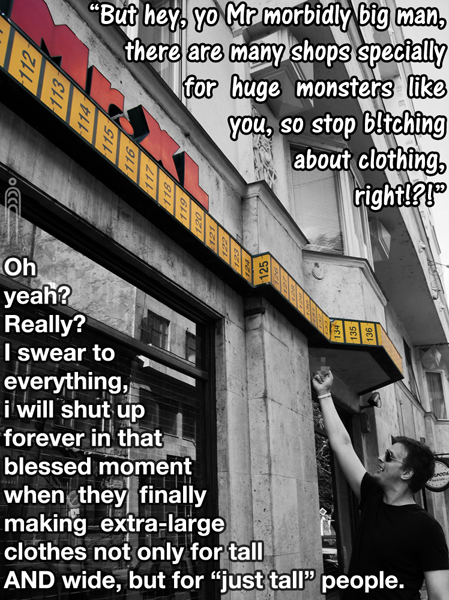 I think super-sized people don't make up a large enough percentage of the population for clothing manufactures to worry about making clothes that fits us. There are "nice try" or "close enough" stuff but never "O.M.G. It's good fits!". Normal people go shopping and choose what they like. I go shopping (btw i hate shopping [Class "A" first world problem]) and choose the one thing that doesn't make me instantly vomit. 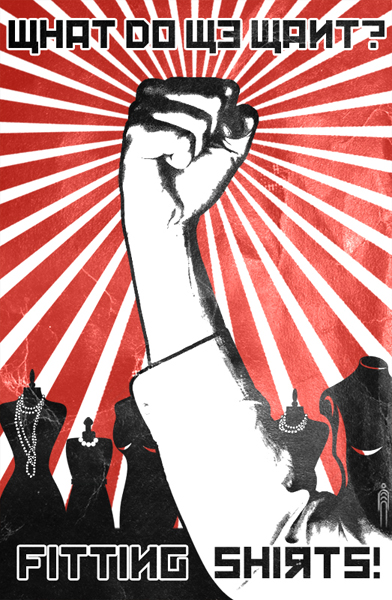 givemychance.com/kampanyok/14280rIxKg8NbUzZiSGooncIAnd now: how could you change the world? Well, my world would definitely change if I had a sewing-machine. I would finally be able to make some clothing that fits me. I know the basics but with some money I could even take a course in clothing design. That would solve one difficulty in my life.

How could you make a bigger change? If I could enroll in the Arts and Crafts and Materials University, I could learn everything about fashion and clothing design and one day I could start a little business making extra cool clothing for extra big people. Also, I might be able to buy a little car and customize it to my dimensions. Last but not least, it would be great if I could afford the medical costs for a genetic screening to see if I will transmit my height to my future children. OMG - with this THREE of the problems of my life would be solved.

And finally, how can you make a multiversal-level change? Well, this is where things are getting get serious. You can make a difference in every parallel  universes by donating enough money to  fund my research in interdimensional travel. Then I could visit all my  parallel selves and tell them: "There is hope. Humanity is actually GOOD!  Follow my lead and you can make this world a better place too!"

YOU CAN DONATE HERE

Honestly: wouldn't be it wonderful? Of course it would... Anyway, if just one person would help me with few cents, I would be unbelievably, indescribably, unusually grateful & happy!

Best wishes to everyone.